MAP01: Back to Saturn X Radio Report is the first level of the first episode of Back to Saturn X. It was designed by Sarah Mancuso (esselfortium) and Richard Frei (Tarnsman), the former of whom composed the level's music track, "Entering". The par time is 1:15. In the official add-on version, this level's name is BTSX Contractual Obligation.

Beginning outside, the player enters a quite expansive station with a nukage river flowing through it, and finds the blue keycard which allows them to access the tram station and exit. 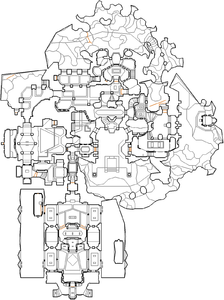 Map of Back to Saturn X Radio Report
Letters in italics refer to marked spots on the map. Sector, thing, and linedef numbers in boldface are secrets which count toward the end-of-level tally.

Go through the doorway on your left, then head towards the water-filled tunnel on your right (collecting a shotgun on the way) and follow it until you get outside again. Head north up some steps to an empty floor (there is an armor at the far end on Hurt Me Plenty skill level or lower), then go through the doorway in the north-west corner to kill a waiting imp and zombiemen. Go through another doorway in the south-west corner to reach a nukage pool with more zombies and a spectre, then follow the walkway south to another room and climb the steps on the south side to get on top of a bridge leading over the nukage. Cross the bridge to enter a curved hallway with a chaingun protected by one or more cacodemons, then head east into a large room with another nukage pool.

Follow the path east past the nukage to reach a hallway with some armor bonuses, then head straight forward through an open door and turn left to climb some steps. Follow the next hallway down to an outdoor area with some chaingunners, head south through a blue-floored room to find some steps that lead up to a ledge with an arachnotron, then open the door here to find the blue keycard above the second outdoor area you visited. Drop down and open the locked door on the west side, then flip the switch straight ahead to go down to another hallway. Follow this hallway to another lift and flip the switch on your right, which will bring you to the tram station (you will revisit it several times over the course of this WAD); from here you can board the tram at gate B (in the north-west corner) and press the exit screen inside it to finish the level.

On reaching the hallway with armor bonuses, climb the south staircase to get a berserk pack.

* The vertex count without the effect of node building is 4944.