MAP01: Bad Reception is the first map of Valiant. It was designed by Paul DeBruyne (skillsaw) and uses the music track "Air," originally composed by Stuart Rynn (stewboy) for SpaceDM9. The par time is 3:50. 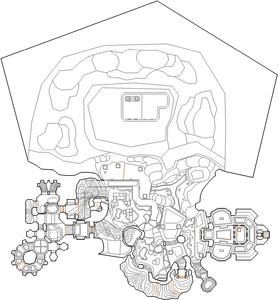 Map of Bad Reception
Letters in italics refer to marked spots on the map. Sector, thing, and linedef numbers in boldface are secrets which count toward the end-of-level tally.

Go up the steps and through a door, then drop down the hole in front of you to face a zombieman and shotgun guy. Go through either of the doorways next to the monsters to reach a circular chamber, then walk round to find the yellow keycard in a recess; as you approach the key some closets containing super imps and more zombiemen, so leave the chamber immediately to avoid being surrounded. Enter the water trench to the north and go up a curved staircase to find an armor, then walk a short distance east to find a button - the button will raise a bridge from the water, but will also open a closet behind you containing two shotgun guys and a super demon. Go back down to the water and get on the bridge you just raised, then turn right to see a yellow key door.

Go through the door to a junction, ready to dodge some imps and zombiemen that are released behind you, then follow the gray path north and east to an area with crates and kill some waiting imps and shotgun guys before moving on. At the end of the path, proceed south into a valley and continue in this direction until you reach a water pool containing a rocket launcher then go east up some steps to a lift guarded by imps and shotgun guys; kill them quickly because more imps and zombies as well as a revenant will have teleported in behind you. Activate the lift and kill two shotgun guys waiting on it (or chaingunners on Ultra-Violence (UV) and Nightmare (NM) skill levels), then ride the lift up to the top floor.

Ahead are one or two mancubi - step off the lift then walk north-east to a button between two green doors guarded by more monsters. Pressing the button will open both doors and reveal imps, as well as allowing more imps along with four demons to teleport in behind you. Enter the building, kill a waiting mancubus and go to the east side to find a passage leading to the blue keycard - taking it will open a closet behind you containing a revenant (or arch-vile on UV and NM), along with two more closets to the north and south with imps and shotgun guys. Fight your way over to the west side of the building and flip a switch (requiring the blue key) recessed into the west wall, which will open the exit door behind you. Go through it and kill any waiting chaingunners, then step on the red X to finish the level.

Search behind the crates near the center of the level to find health bonuses, armor bonuses and a berserk pack.

There are more crates in the valley area - walk north from these crates to find a chainsaw.

After using the lift to reach the top level, follow the path north to a grassy T-junction. Take the east path to find a partial invisibility guarded by a mancubus, then take the west path to a seemingly empty area with a pillar holding a supercharge. The pillar will lower as you approach it, but you will have to fight off a pack of zombies that teleport in to get it.

* The vertex count without the effect of node building is 4720.