MAP01: Bashed Base is the first map of Doom 2 Unleashed. It was designed by Paul Corfiatis (Pcorf) and uses the music track "They're Going to Get You" by Robert Prince.

When using the music WAD included with this megawad, this level instead uses the music track "Generation F" by Paul Corfiatis. 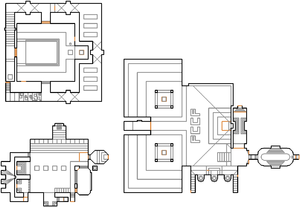 Map of Bashed Base
Letters in italics refer to marked spots on the map. Sector, thing, and linedef numbers in boldface are secrets which count toward the end-of-level tally.

Head straight forward to an area with zombiemen and take the berserk pack at the top of the steps. This will lower two walls behind you, revealing more zombiemen and demons guarding red and blue teleporters. Both teleporters are needed to reach the exit, but they can be used in either order.

Step into the red teleporter to be teleported to a large gray room - in front of you is a wall with alcoves containing zombiemen and imps, and two demons will appear from the sides when you start firing weapons. Kill all the monsters ahead then go to the north-east corner to find a lift, ride this up to a ledge and follow it round to a switch. Press it to open a set of bars on your right, drop off the ledge and go through the bars to press another switch which will open a door to the north. Go back through the bars and through the door you just opened, then follow the passage round until you reach a switch - flip it to lower a platform holding the yellow keycard. Take the key and turn right, climb up the stairs that have risen ahead and go through a door with yellow key markings. Kill the zombiemen in the next room and press the switch behind them to raise a set of platforms in the main room. Go back through the yellow door and run across the platforms to the red keycard, then press the switch behind it to open a door next to where you first entered the room. Behind this door you will find an imp guarding a teleporter back to the starting area.

Step into the blue teleporter to find yourself facing a number of demons - if you stand perfectly still they will not be able to attack you. Once the demons are killed, cross the room and open the door in the west wall to confront two zombiemen, then turn right and climb the steps to the top. Turn right and kill the approaching imps, then approach the raised platform holding the blue keycard and turn right again to go through another door. Turn left and follow the ledge round to a switch, which will raise a platform you can use to cross to the next ledge. Follow this second ledge past another door until you reach a switch, press it then go through the door you just passed. Turn left and follow the corridor through two rooms containing several zombiemen as well as three demons, until you see the platform with the blue key in front of you. Flip the switch to lower the platform so you can take the key, then return to the teleporter you arrived on to be taken back to the starting area.

After collecting the red and blue keys, return to the starting area and go to the south-east corner to find a door between two switches. Press both switches to open the door and reveal some imps, plus demons on Hurt Me Plenty (HMP) skill level or higher. Kill them then head through the exit door and flip the switch behind it to finish the level.