MAP01: Chasing Suns is the first map of Sunlust. It was designed by Zachary Stephens (Ribbiks) and Daniel Jakobsson (dannebubinga), and uses the music track "Journal" from the game Flashback. 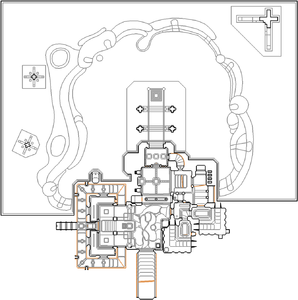 Map of Chasing Suns
Letters in italics refer to marked spots on the map. Sector numbers in boldface are secrets which count toward the end-of-level tally.

This map has one key.

Go forward and take a shotgun in the dark room. Right there, press the switch to lower the wall. In the next area, turn left and walk the stairs up to a wall which will open. Kill the imps in the room. Here, you need to open another switch to proceed, however the traps containing enemies will open. Knock them off first. Explore the rooms they were in to get various items, including berserk. Now, press the mentioned switch. Three guards will be here and two imps or chaingunners in the dark area. Turn right and go straight to another room which is similar to the previous one. Knock off the enemies. Enter a small wooden closet here which contains a skull switch. Press the switch to unlock the yellow key room. Go back and you will notice this room. Take the yellow key and drop to the outside area.

In the courtyard you dropped to, walk upstairs to the yellow door ahead. Behind, collect shells and press the switch, and you will be lowered to the ground instantly. Ahead is a room with orange lamps that you need. Kill the enemies within this room first. Head there and press the glowing skull switch.

Now, you have unlocked the exit. Return to the courtyard in which large doors are opened. Kill the enemies and follow the dark path to the south and you will complete this level.

* The vertex count without the effect of node building is 4466.