Unchecked
This level occupies the map slot MAP01. For other maps which occupy this slot, see Category:MAP01.

Map01: Checkpoint Charlize is the first map of Project Einherjar, designed by Impie in 2016 and constructed in Doom Builder 2. 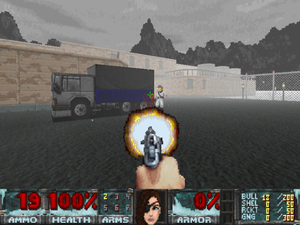 Checkpoint Charlize is a small outpost sandwiched between two truck yards. Juno begins in the south truck yard with a handful of guards, some of which fire at her from the rooftops and the other side of the fences if she makes any noise outside. The map is very small and straightforward: Juno must fight through the small central building and the north truck yard to reach the exit, which is guarded by an Amazon Commando and a few Juggernauts.

All of the secrets are found in the central building.

This map was adapted from the first level of Impie's earlier Midgard game based on the same novel.