MAP01: Comeback is the first map of Plutonia 2. It was designed by Adolf Vojta (Gusta), and uses the music track "Pyrarinth" by James Paddock. The par time defined in MAPINFO is 30 seconds. 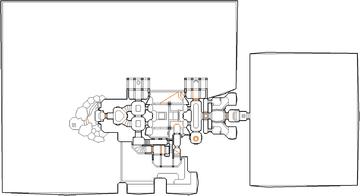 Map of Comeback
Letters in italics refer to marked spots on the map. Sector numbers in boldface are secrets which count toward the end-of-level tally.

Grab the backpack and chainsaw and open the door. You will find a few former humans. You cannot open any of the doors here, so head through the vines killing any enemies you find in the next area. Over there, find an opening with a blue floor, and you will find a skull switch. This opens the doors from before. The northern one leads to the blue keycard, but you cannot reach it yet. Go through the southern door and kill the cacodemon. Go behind him, through the door and down the path until you get the yellow keycard. After getting it, drop down and go through the vines to the right. There is a yellow door to the north and a yellow switch nearby. Flipping the yellow switch allows you to get the super shotgun that is opposite the yellow door. Get it and then head through the yellow door. Kill the imps and pain elemental, then press the lion switch. After that head through the nearby door and go to the next door you see, looking out for teleporting enemies as you do. The door just so happens to take you to the blue key room, and the key is now accessible. Grab it and then return to where the yellow switch was. Nearby is a blue switch, which opens the blue bars to the exit.

It's possible to grab the yellow key if you straferun towards it from the central courtyard.