MAP01: Congo is the first map of The Plutonia Experiment. It was designed by Milo Casali and uses the music track "The Imp's Song" from Doom.

This level was also ported to PlayStation Final Doom as MAP25: Congo. 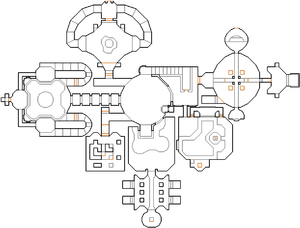 You begin in an outside area, on the top of land that is surrounded by sludge and right on a box of shotgun shells. In front of you is a long hallway and two doors to the left and right. Go through either door, up the stairs, and clean out the shotgun guys at the top. Get back to the initial courtyard and go through the long hallway into next courtyard. To the right of you and around the corner (southwest) is a hallway leading to an optional area with a super shotgun. Go to the hallway, and be careful because a wall will open behind you, revealing some chaingunners and a medikit. Go through the door, clear out the chaingunners, and find the box that looks slightly different from the others (southeastern one). This box is a lift. Ride it up, grab the super shotgun, and kill the arch-vile that appears. Exit the room, go back through the hallway, and head right into the room to your right. Follow it to the end, where you will see a pillar with a switch behind it. Hit the switch, grab the medikit, and run back out, killing the revenants that follow. Go back in and grab the rocket launcher and rockets from the rooms that the revenants came out of, and go back to the courtyard.

Go forward (north) and up some stairs, keeping an eye out for baddies, and go through the door. You will be on a walkway that leads off to three different paths. Go forward, and kill the revenant that comes up. Go left (north), hit the switch in the room, and head back out. Go along the path the revenant came up on (east), and in the room is a chaingunner on your left and right, and a mancubus that will ride up a lift. Kill them, grab the red skull key, head out, and kill the new baddies that should have just showed up. Go back into the courtyard, and kill the arch-vile on top of the pillar. Go into the last hallway you have not been to, that is in the northwest of the courtyard, and you will be in another outside area with a pillar in the middle, and imps on ledges to the left and right. Proceed forward, and some chaingunners will appear behind you. Kill them, then go through the red door. Hit the switch, which lowers the pillar with the blue skull key on it. The switch also revealed two chaingunners, so use your fist to get them to come out. Mash them and grab the key, then exit. Go back up the stairs, and into the hallway that should be in front of you (south). Kill the chaingunners and mancubi you see, then go through the blue door. Follow the hallway, and come out onto the platform with the mancubi, then step on the black teleporter to exit the level.