MAP01: DWMP MAP28 Near Final Beta is the first map in the zDMP2014.pk3 mapset of Doomworld Mega Project 2014. It was designed by FireSeraphim and uses the following music tracks: "Tower of the Shadow of Death", "Dreaming", "Tension", "The Last Moment of the Dark" and "Final Battle" by Yuzo Koshiro; "Nobody Told me About Id" and "Facing the Spider" by Bobby Prince; "Rithm" and "The Graveyard" by Kevin Schilder; and "Tech" by Morey Goldstein. 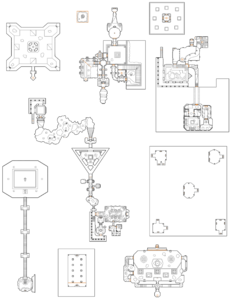 Map of DWMP MAP28 Near Final Beta
Letters in italics refer to marked spots on the map. Sector, thing, and linedef numbers in boldface are secrets which count toward the end-of-level tally.

This map was inspired by the Ys series, more specifically the final dungeon at the end of YS I, Darm Tower, with callbacks to the boss arenas of the cyberdemon (E2M8: Tower of Babel), the spider mastermind (E3M8: Dis), Traductus (Hub 5: Traductus' Tomb), the Loremaster (MAP27: The Lab) and the "mirror" mazes from Darm Tower, as well as the infamous "Devil's Music" room, which the player can disable the "Devil's Music" by shooting at an exposed piece of pipe in one of the balcony areas prior to the aforementioned room.