MAP01: Desecrated Paths is the first map of the Newdoom Community Project. It was designed by Darren Finch (Doom Dude). 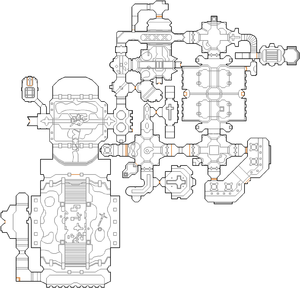 Map of Desecrated Paths
Letters in italics refer to marked spots on the map. Sector, thing, and linedef numbers in boldface are secrets which count toward the end-of-level tally.

From the start, head through the courtyard and get the shotgun in the middle. Go east and you will end up in a similar courtyard. Take either the east or south door and find the switch and press it. When you leave, look out for imps and shotgun guys, and then take the path north. Cross the bridge, and if you want a chainsaw, go right. Otherwise go left. Follow this hall, and when you can go left, then do so and press the two switches to open the doors into the next courtyard. The switch at the end opens the southern end, into an even bigger yard with stairs. Go all the way south, then west until you find the exit switch.

* The vertex count without the effect of node building is 4164.