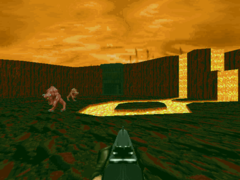 MAP01: Dig is the first map of UAC Ultra. It uses a music track from Abuse. 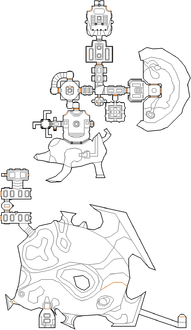 Map of Dig
Letters in italics refer to marked spots on the map. Sector, thing, and linedef numbers in boldface are secrets which count toward the end-of-level tally.

Make sure to pick up the shotgun and radiation suit before taking the lift down. When you emerge outside, there is a backpack to your left. Continue right, and around the big red rock, killing some demons along the way. Head through the opening to the base and open the door using the hand switch. In the next room, a switch will be revealed on your right, so press it to open the next door. Maneuver through the mess you see and flip the switch to open a teleporter behind you.

You will appear in a room with imps and armor bonuses. Open the north door to be in a hallway. To your right is the yellow door, so move left. At the bend is a switch which opens the nearby door for a chainsaw. The door on the opposite side of the hall has a few enemies behind it as well as two switches. You need to press both, then continue into the next room. A few former humans and imps are present in this room. Maneuver around the stairs looking out for spectres, shotgun guys and more imps and climb the stairs to the armor. At the top of the stairs, the plate opens two walls in front of you with cacodemons behind them. You need to jump to these alcoves, as the yellow key sits inside here.

A few imps will be waiting for you when you head back to the hallway, so dispose of them. You can head through the yellow door you could not enter before if you wish, for another backpack, but now you want to head through the passage on the west side of the hallway. Wheel around the platform in the middle of the next room, killing monsters as you go, and take the next door which has steps leading to the platform. Look out for imps as you jump. The next big room you find has yellow lava flowing down and lots of enemies, so clean out this room and flip the switch. There will be a mancubus (on Ultra-Violence or higher) or a Hell knight (lower difficulties) behind you; get rid of him and in his hallway there is a switch on your left which opens up the exit (look out for the chaingunner if you are playing on Ultra Violence or higher).

One of the multiplayer-only 4 shotgun shells (Thing 284) in the starting room has no flags set for any of the three difficulty classes, so it does not actually appear in the level.

* The vertex count without the effect of node building is 2269.

In the room beyond the yellow door, if you look out the window to the north, you can see Daisy's impaled head on the mountainous terrain, as seen in the ending of Inferno.

On linedef 717, the computer terminal has some computer monitors on it. The one in the top left corner reads "Watchmaker" in orange letters. This is a reference to Watchmaker, one of Jon Vail's many favorite bands. Just under that monitor, is another one with a white symbol. The symbol is an inverted peace sign which is the logo of the band Trash Talk and is also the album art of Trash Talk's self-titled album. On linedef 712, the computer monitor has red text that is difficult to read, but in its original font size it reads "take control-- the only control-- you'll ever have--" before it was resized to fit in the computer's screen. This is a lyrical reference to the song "Pulling Teeth" by the band Left For Dead which is another of Jon Vail's favorite bands. The song is on their only album: "Splitting Heads". These same computer monitors can be found in many other locations in UAC Ultra.