MAP01: Entering the Building is the first map of Hell Factory. It was designed by Tomi Rajala (Lu Wang) and uses the music track "". 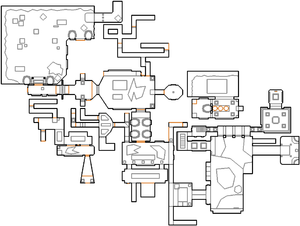 Map of Entering the Building
Letters in italics refer to marked spots on the map. Sector, thing, and linedef numbers in boldface are secrets which count toward the end-of-level tally.

In recent versions of GZDoom (at least as early as version 1.4.0, and possibly later versions of ZDoom as well), the silent teleport in the ventilation shaft sections (west and north portions of the map) will not correctly rotate the player 180 degrees, thus making it nearly impossible to progress. This can be fixed by running ZDoom/GZDoom with the command line parameter gennodes 1.

* The vertex count without the effect of node building is 1919.