MAP01: Entrygray is the first map of 50 Shades of Graytall. It was designed by James Paddock and uses the music track "Open Pod" composed by Bjørn Lynne. As the name of the level hints, the layout is inspired on the first level of Doom II, Entryway.

Like all maps in 50 Shades of Graytall use preferred flat texture along with the sky, this level uses gray tile (FLOOR0_3) for floors and ceilings. 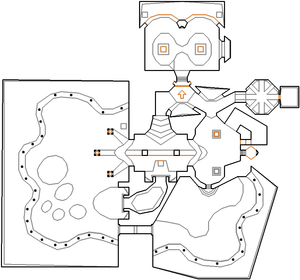 Map of Entrygray
Letters in italics refer to marked spots on the map. Sector, thing, and linedef numbers in boldface are secrets which count toward the end-of-level tally.

Jump over the gray stumps until you can enter a passageway. This passageway will lead you to the second open area, which should look like the starting room of Doom II's Entryway. There are even that very two former humans and the stairs but they are only perceptible, not visible. Later, follow the tortous corridor until you can see an asterisk-shaped room and the third open area to your right. Go to that area. Lower the lift on the left side, which is made of DOORTRAK texture and open the door, which also has the same texture. The armor bonuses will lead you to the end of the ledge. From the ledge jump across the nearest platform with a health bonus (just the same way the secret with rocket laucher is accessed in the original Entryway). The exit and an optional area to the south are now both available.

The southern area is identical to the secret in Entryway in that it also contains a shotgun (on HMP and higher you already have the shotgun).

This data is based on the MAP01 version in 50shades_fixes.wad.