MAP01: Entryway is the first map of Doom II. It was designed by Sandy Petersen and uses the music track "Running From Evil". The par time is 30 seconds.

In the PlayStation and Sega Saturn joint port of Doom and Doom II, Entryway is MAP31, and is the port's first Doom II level. 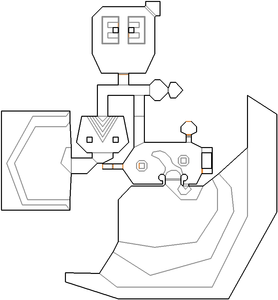 Jump down from the ledge. Enter the corridor in front of you, head east at the first bend and go south at the next. Enter the door in the northeast corner of the next room and flip the switch.

At the very start of the map, before dropping down to the floor, turn around and head through the passage behind you to access a partially open-air area and get a chainsaw.

In the northeast of the winding corridor, there is a room containing eight health bonuses.

The door of secret #5 (sector 29) has FLOOR5_3 as its floor flat instead of the adjacent RROCK09.

An early version of MAP01 released in 2015 shows several notable differences from the final version. The most immediately apparent is the existence of an entirely different starting area, with the player beginning in an anteroom filled with computer kiosks, and only after passing through the room and a short hallway, coming upon the more familiar overlook of the triangular staircase. The early version of the level also has some different texture work, with the northernmost room being textured more in the style of Knee-Deep in the Dead.

The official French name of this level is Entrée (accents are not reflected in the game itself due to technical limitations).