MAP01: FP is the first level of 32 in 24, a deathmatch megawad. It was designed by Shaikoten, and uses the music track "Light My Fire" by The Doors, sequenced to MIDI format.

The map was the first submission to the project, having been created in about ten minutes according to the author, and posted in the project thread within an hour after the start time. This also explains the map title: FP is an abbreviation of "first post."

FP later appeared in MAP25 and MAP30 of 32in24-14, as a part of a rule for that session allowing the reuse of architecture from previous 32in24 maps. 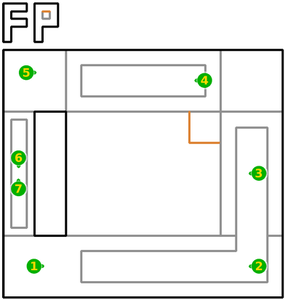 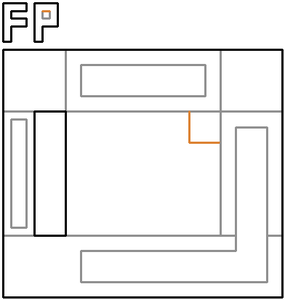 The level is a small square arena with a low light level. The players will generally stay on the walkways around the edge of the map, as the centre of the map is a pit of damaging lava - with a lift to allow a chance at escaping, however, this pit also contains shell boxes and boxes of bullets, the only ammo pickups in the map. Most of the walkway is open, allowing a clear line of sight from across the map, however a section on the west side is covered by a tunnel. This allows players to take cover, however a line of corpses hang from the ceiling, which do not obstruct the player's movement, but may obscure their vision instead. The walkway is also stopped from being continuous by a raised platform in the north-east corner. At the centre of this platform is a BFG9000, but the only way to get to it is to drop into the lava, and ride the lift to its highest position, which brings it level with the platform. This will be particularly difficult to do in larger games. Immediately south of the platform, on the eastern edge of the walkway, is a rocket launcher. This level contains no health, armor, or power-ups of any kind.

* The vertex count without the effect of node building is 55.