MAP01: Fa'cil-ity is the first map of 2048 Unleashed. It was designed by Captain Toenail and uses the music track "At Doom's Gate" by Robert Prince. 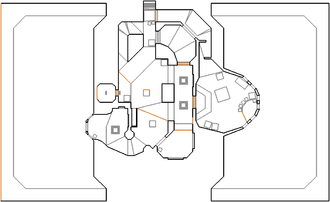 Map of Fa'cil-ity
Letters in italics refer to marked spots on the map. Sector, thing, and linedef numbers in boldface are secrets which count toward the end-of-level tally.

Take the armor sitting on the box on your right then go down the stairs to an area with three zombiemen. Look right to see a wide doorway and walk through it, then open the green door ahead to enter a room with crates - the red keycard can be found at the east end of the room next to two shotgun guys. Go back through the green door and kill the imps and shotgun guys that have appeared in the corridor, then turn right and open the silver door ahead requiring the red key. Climb the steps up to a tan walkway then turn left and follow the walkway to the exit door guarded by another shotgun guy. Open the door, kill the demon waiting behind it (or cacodemon on Ultra-Violence and Nightmare skill levels) and throw the switch behind it to finish the level.

South of the green door is a lift. Flip the switch next to the lift to lower it, then ride the lift up to find a shotgun guarded by two imps.