MAP01: First Assault is the first map of Japanese Community Project. It was designed by Tatsuya Ito (Tatsurd-cacocaco) and uses the music track "Tempter," originally composed by Mark Klem for Memento Mori II. The par time defined in MAPINFO is 30 seconds. 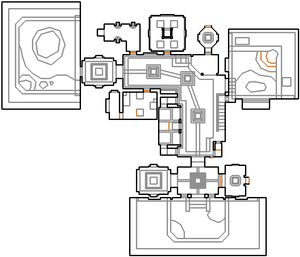 Map of First Assault
Letters in italics refer to marked spots on the map. Sector numbers in boldface are secrets which count toward the end-of-level tally.