MAP01: First Blood is the first map of Disrepair. It was designed by Andrea Rovenski (Cyberdemon531) and uses the music track "Blood, Brain, Massacre" by John Weekley (PRIMEVAL) (from Unholy Realms). The par time defined in MAPINFO is 20 seconds. 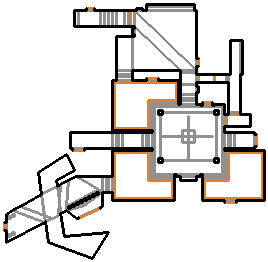 Map of First Blood
Letters in italics refer to marked spots on the map. Sector numbers in boldface are secrets which count toward the end-of-level tally.

A very small map with only a few monsters, First Blood also acts as an introduction to additional content featured in the wad, in this case the Doomsphere.

Activate the first switch to open the door in front of you, and collect the chaingun in the secret areas. Shoot the switch visible from secret #2 to lower the lift leading to the exit. This allows you to bypass the normal route almost entirely. The lift raises again quickly, however, so you'll need to be fast.

* The vertex count without the effect of node building is 363.