MAP01: First Matters (named 1st Matters on the automap) is the first map of Erkattäññe. It was designed by Nicolas Monti and uses a rendition of the track "Sommeil Paradoxal" by Sobrenadar, sequenced to MIDI by Nicolas Monti. 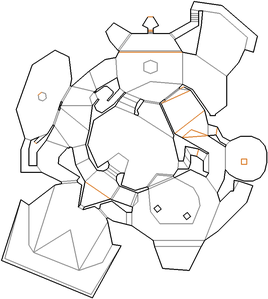 Map of First Matters
Letters in italics refer to marked spots on the map. Sector numbers in boldface are secrets which count toward the end-of-level tally.

At the start, head into the room to the left where there is a pillar in the center. Go to the other end of the room, and you will be in a corridor with two windows. Go to the end and you eventually get outdoor. There, turn left to enter inside the other portion of the building. You will in a room with nukage/water. Head to the east of the room and enter the middle corridor. Once you find a lift, take it up into another room, in which you need to press the switch to get the exit accessible.

Return to the liquid room, and notice an opened wall in the west. Go there to get outdoor and walk on the staircase to the north. Jump over the central pillar and to the northern side, so you can finish the level.

* In erkaknee.wad the count of radiation shielding suits is 1.