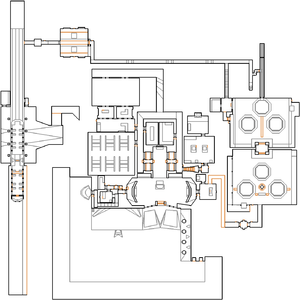 Map of GenEmp Corp.
Letters in italics refer to marked spots on the map. Sector, thing, and linedef numbers in boldface are secrets which count toward the end-of-level tally.

Step forward to collect the kevlar vest and case of rounds (or rounds on "Let's rip them apart!" (LRTA) skill level or higher) at your feet, then run north-west past a GenEmp sign until you get to the west side of the building where a thug guards a gray door. Press the "Security Office" button next to the door to open it and reveal another thug, then step through and head down the steps to find a thug guarding the KeyCard as well as an SI array, cases of rounds and one or more hypos. Go back to the starting point then head north towards the front door of the GenEmp building - you can press the switch next to this door (requiring the KeyCard) to reveal a button that will open it.

As you go through the door and enter the lobby, one or two thugs will appear behind the reception desk and the back walls will lower to reveal more thugs, as well as androids and phages on LRTA or higher; use the tazer on the reception desk (and on LRTA or lower, a force field in the west compartment) to help you. Enter the hallway behind the desk and press the button on the west wall to open the elevators next to it, kill any waiting thugs then enter either elevator and press the up button to go to the second floor. Approach the west elevator door to open it, step out into a narrow corridor then walk north until you see two doors opposite each other. Press the button by the west door to open it, slay some waiting thugs then flip the red switch at the back of the room to open another door further ahead.

Go back to the corridor and follow it east and south until you reach another set of elevators. Press the button opposite these elevators (revealed by the switch you flipped earlier) to open the door next to it, then walk through a series of barriers behind it until you reach a thug guarding another switch. Flip this switch to open another door then go through to a room with two computer desks, along with thugs, a phage and an android on LRTA or higher. Check the east desk to find a tiny red button on its north-east drawers and press this to open another door to the north - behind this door you will see the password on a desk, guarded by a thug and two androids on LRTA or higher.

Go back to the elevators and ride them down to the lobby, then look behind the curved white wall on the east to find a panel requiring the password to open. Open the panel and press the button behind it to open the nearby door, kill all the thugs waiting in the next room then look behind the security desk to see a panel with blue and red buttons; pressing this panel will open the north-west door, allowing you to collect the Vulcan rubber boots behind them. With the boots, you can safely run through an electrified corridor to find an elevator (guarded by a phage and android on LRTA or higher) that leads down to a chemical storage room. Kill the thugs (plus more androids and phages on LRTA or higher) guarding the vats, then press the hand switch in the south wall to lower a lift next to it.

Ride the lift up and look left to see a computer panel; on LRTA or lower you can press this panel to raise more lifts around the vats for easy navigation, but on "I am immortal" (IAA) the panel will be blocked by spikes. In any case, you need to get on top of the vats and run across them to get to a platform on the east side of the room, then walk north to find a super kevlar vest and two cases of cartridges - from here you can walk west along a narrow ledge to a metal platform, then open the airlock door here to reach a second chemical storage room. Instead of dropping to the floor below, follow the walkway west and north to a door with a recessed button next to it and shoot this button to open the door.

Go through and head round the corner to kill a thug guarding a switch panel; a room with androids and supplies will also open on your left. Press the panel to open the north door then go through and head down some steps to a dark tunnel, which you can follow to a switch next to a red laser tripwire; pressing the button will open a door ahead, but stepping through the tripwire will lower the walls on either side, revealing two buzzers on LRTA plus two stealths on IAA. Head through the door you just opened to find another button and press it to lower a lift with a thug, then ride the lift up and step out on to some train tracks.

Head south towards the train platform and slay several waiting enemies (on LRTA or higher), then walk through a doorway to the east and press the button here to open a door leading on to the platform. Board the train then continue south through the carriages until you get to the driver's cab, then press the switch panel here to end the map.

From the lobby, ride the west elevators up then enter the room due west of this point. You can find a 007Microtel in the middle of the room.

At the train platform, head east to find a passage that is blocked with spikes. Approaching the spikes will open a room on the west side of the platform, which contains ammo, a super kevlar vest and a 007Microtel.