MAP01: Genesis is the first level of Eternal Doom and was designed by Alex Mayberry. You start off having broken out of some sort of sleeping tube in a spaceship. 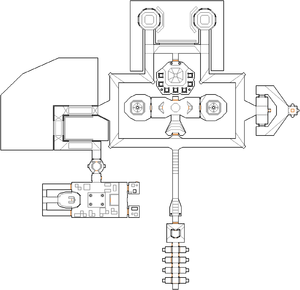 Map of Genesis
Letters in italics refer to marked spots on the map. Sector, thing, and linedef numbers in boldface are secrets which count toward the end-of-level tally.

You start in a cryonic tube. Step out, turn left immediately and grab the shotgun and a box of shells a couple of tubes away. Get out of the room and go either way. Follow the hallway (which loops back on itself), killing the enemies in your way, until you reach the opposite end of the hall where a door is to the north and a set of stairs to the south. Go through the door on the north, enter the room, and kill the demons, spectres and imps. Now notice the two computers. Each one, when pushed in the center, opens the door behind it. On the western dark room is the blue key, and in the eastern one there's a soul sphere, but before you grab them, push the middle of the northern wall to reveal a radiation suit (the floor in the dark rooms is toxic) and a box of shells. Get out of the room and go to the right, around the corner and then left. Follow the hallway to an elevator and go down to a big room with crates. Kill the opposition. The blue doors are on the west side of the room. Go through any of them and go up the ladder at the end to reach the upper room. In this room, hit the switch in the middle of the computer to lower a platform on the other side of the big room. Go down, to the other side of the room, ride the platform up and enter the room on your left. There's a switch in the wall right behind some crates. Hit that switch to make the red card appear near the southwest blue door and go get it. Ride the elevator back to the main hallway (if it's raised use the switch to lower it). Go back to the door north/stairs south junction and go up the stairs. Kill the cacodemon and open the door. There's a small room with red bars, along with compartments containing monsters. Raise the red bars and activate the computer behind the super shotgun to reveal switches next to this compartments, which allow you to disable the barriers. Behind each monster is an item, and the yellow key is behind the third one to the left (a cacodemon in UV). Grab it and go out of the room, down the stairs and then turn right until you reach the exit room around the next corner (to the right again). Open the yellow door in the middle and hit the switch that disables the blue barriers. Go through either door, kill both revenants, and step on the teleporter to finish the level.

* The vertex count without the effect of node building is 2094.