MAP01: Glass Messiah is the first map of DBP37: AUGER;ZENITH. It was designed by SuperCupcakeTactics and uses the music track "One Night in Neo Kobe City" from Snatcher. The par time defined in MAPINFO is 1:40. 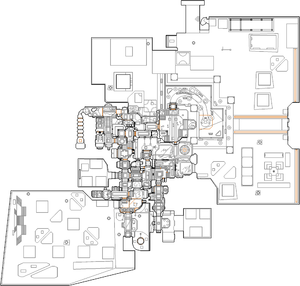 Map of Glass Messiah
Letters in italics refer to marked spots on the map. Sector, thing, and linedef numbers in boldface are secrets which count toward the end-of-level tally.

When you've finished admiring the cityscape, turn right and head through the door at the end of the hallway. Turn left and you’ll see a closed door next to a crate with four explosive barrels on top. Open the door by pressing the button next to it and head straight through.

Proceed through this room to the fork in the corridor ahead. Turn north here at the broken window and head through the door. Go up the stairs on your right and then through the door at the top. You’ll find yourself in a blue-carpeted, S-shaped corridor. Go straight to the end and pass through the door with the “Exit” sign above it.

Steel yourself for a fight, and use the hand scanner at the end of the helipad to your east. A lot of enemies will warp into this area including cacodemons, heavy weapon dudes, and at least one baron of Hell. After enough time passes, the elevator to the north will open. Descend it and then follow the curving path outside to reach your exit car.

* The vertex count without the effect of node building is 12500.