MAP01: Going Up is the first level of Going Down. It was designed by Cyriak Harris (mouldy), who also composed the music track, "Somebody Set Up Us The Bomb."

The level takes place mostly on the roof of the UAC headquarters, where the player fights his way through hordes of zombies until he can access the elevator down into the building. 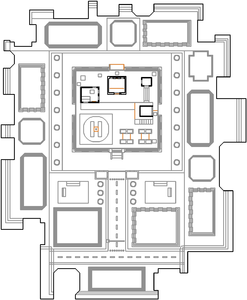 Map of Going Up
Letters in italics refer to marked spots on the map. Sector numbers in boldface are secrets which count toward the end-of-level tally.

Proceed down the road towards the main building. Since the gate is closed, go through either side booth with a lone zombieman in it. Then go around the building to find a lift on the opposite end. Press the switch to raise it all the way up to the roof. Up here are a lot of zombiemen, as well as a few shotgun guys and imps. If you go through the trail of health bonuses on the lower right part of the building, you will trigger a few closets to open. The blue keycard rests on a pole. To get it, find the small set of stairs on the east side of the building and head westward, going to the room that had the shotgun guys in it. Flipping the switch here lowers the pole with the blue key, but also releases zombiemen all around the roof. When you are done fending them off, make sure you pick up the key, then take the blue elevator door. Take out the two shotgun guys here and press the switch to lower the elevator to the next level.

The building is mentioned at MAP30 and is reused at MAP32 as an after effect.

* The vertex count without the effect of node building is 3032.