MAP01: Hangar is the first level of most console versions of Doom, based on the original E1M1: Hangar with modifications made to accommodate consoles' framerate and storage capacity limitations. The author of the conversion is American McGee, and the original author of the map is John Romero. The map first appeared in Atari Jaguar version, and is additionally used in the 3DO, Sega 32X, Game Boy Advance, Sony PlayStation, and Sega Saturn versions. The Sony PlayStation version introduces additional modifications to add colored lighting, translucent textures, and reverberation effects. 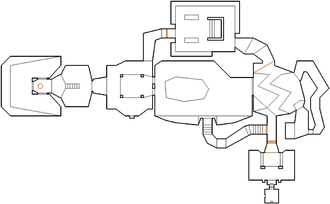 The path toward the exit on this level is straightforward enough. Go to the northern end of the starting room and you will eventually come to the first door. Enter this door to enter the central computer room. To the right (south east) of this room is the escape, go there. You will enter a room with nukage and zig-zag bridge guiding you to the second door. Enter this door and you will be in the last room where the last door is located. Behind the door is the exit switch.

In the PlayStation release, the sound data for lost souls spat from pain elemental is never loaded into memory on this map resulting in silent attacks of the monster (the death and the pain sounds are still preserved, with the former being identical to any projectile hit and the latter being pain state sound of the pain elemental).

Console versions of Doom had several removals done on this level; aside from geometry, these include things.

The starting room was cleaned up to feature just two barrels, while previously it had three barrels in total, a dead marine, gibs and pairs of health and armor bonuses.

Two pillars in the armor room were removed entirely along with the technical columns on them. Armor bonuses were removed, but health bonuses have been retained. Also, the entrance room was widened a bit.

The PlayStation port adds some new enemies to the map on the Ultra-Violence skill level:

* The vertex count without the effect of node building is 344.