MAP01: IGNITION! is the first map of Hell Revealed II. It was designed by Jonas Feragen and uses the music track "Push on the Gas" by Sam Woodman. 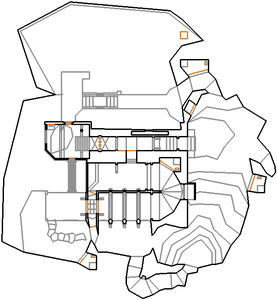 Map of IGNITION!
Letters in italics refer to marked spots on the map. Sector, thing, and linedef numbers in boldface are secrets which count toward the end-of-level tally.

On this level, there are three keys. Either one will allow you to access the exit. To get the blue key, go west from where you start the level, jump west off the dirt stairs, and you will find the key to the north. To get the red key, go into the cavern south of where the level begins. To get the yellow key, go counter-clockwise around the level until you reach a pathway over nukage, and head west. Once you have either key, the doors that require them are located as follows: the blue door is found in a grey hallway accessed from the south using an elevator, or via an opening in the east; the red door is at the northwest of the level, next to the yellow key; and the yellow door is located in front of the bridge in the southwest, next to where the level begins. Open any one of these doors, and then press the button in the northwest of the room.