MAP01: Incident at Dragon Dam is the first map of Midgard Outlaw. It was designed by Mike MacDee (Impie) and uses the music track "". 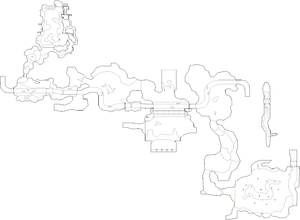 Map of Incident at Dragon Dam
Letters in italics refer to marked spots on the map. Sector, thing, and linedef numbers in boldface are secrets which count toward the end-of-level tally.

Juno recovers from the attack on the caravan to find Drogo missing and her allies dead. She chases after the war criminal in the hope of recapturing him before he slips out of her grasp.

Dragon Dam is an unusually large map for MAP01, but it is very linear in its progression: simply follow the road across the dam, then follow the forest to the river. Along the way Juno will face numerous gauntlets:

Area 1 - A small death squad near the start point, which activates as you approach their truck.

Area 2 - At the next truck, a Lancer sniper begins to take pot shots at you from across the river. You can kill him, or dodge his shots to get the red key and open the gate: once you clear the gate, the sniper leaves.

Area 3 - When you reach the dam, two more snipers positioned across the river take shots at you. They are almost impossible to see, let alone hit with your meager arsenal: run down to the lower level of the dam, hit the lever to open the tollgate, then run back up before the door closes. Open the next gate to progress to Area 4.

Area 4 - The road ends at a gate you cannot open. Take a detour through the forest to the final ambush led by the Drillmatron boss. Beware the melee enemies that emerge from a cave behind you. Grab the outland suit and swim to the exit switch.

The Valkyrie Drillmatron is a big, tough soldier armed with a pair of revolvers, which she can fire while dodging or walking. She appears in back of the ambush platoon at the end of the map: kill all her minions before focusing on her.