MAP01: Into the Gate (Hell Revealed)

MAP01: Into the Gate is the first map of Hell Revealed. It was designed jointly by Yonatan Donner and Haggay Niv. It uses the music track "Suck This" from Rise of the Triad.

The beginning map is the invaded lab. Your mission is to clear the area, find the gate that will start your mission and enter it. Note to coop players: Please don't pay attention to the Cyberdemons outside. If you want to play Hell Revealed in cooperative mode, you should be prepared to face many extra enemies. Note to deathmatch players: This level is probably quite good for deathmatch. 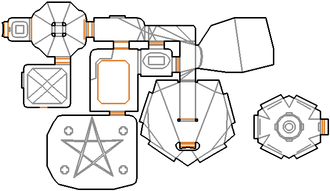 Map of Into the Gate
Letters in italics refer to marked spots on the map. Sector, thing, and linedef numbers in boldface are secrets which count toward the end-of-level tally.

You begin at the foot of a raised walkway, blocked by a caged door. Run onto the walkway and the door will lift. Head forward and follow the passage left. Open the door at the end of the passageway and head left. In the room beyond this next door is a switch which opens the exit area. Run back into the teleporter room and run to the exit.

At the beginning of the level, go through the teleporter behind you four times. On the fourth time, you will be warped into a dark room containing the credits for Hell Revealed, the URL of its official website, and a message reading "HAVE A NICE STAY." Go through the teleporter in this room to return to the normal level. You can go back to this secret room any time you want.

In terms of the speedrun route, this level is quite similar to MAP01 on Doom II. All speedruns on this level take the same route, running down the passage and straight to the exit. The principal difficulty is finding a path around the monsters on UV difficulty. At first players went for the shotgun at the start [1], but aiming takes too much time and it is faster to straferun the whole level pacifist style. [2] Nightmare! demos follow the same route, but taking more time to ensure the monsters will not take too much health off the player. [3]

NM100S recordings require only one change to the route, picking up the rocket launcher en route to the exit. However, this also opens up a shortcut: taking the first door on the left (avoiding the first group of monsters alltogether), strafing past the imps and taking the rocket launcher. This leaves the player with a rocket to use on the two chaingunners, making the rest of the level easier as well. [4] As a result, the NM100S is actually faster than the standard Nightmare! record.

In runs requiring 100% kills, there is again very little optimisation to be done. The player runs through the level on the same route, and in the final room a whole bunch of monsters teleport in. This is the only area of the level that can be made faster: when entering the final room, the player will immediately run to the exit switch, then head back and run to the exit. This triggers a linedef which allows a group of imps to teleport in. At this stage the room will already be full of former humans, sergeants, and teleporting demons, so the player will run back to the room containing the two chaingunners, the entrance of which is usually blocked by demons and easily guarded. A good time is dependent on how quickly the monsters teleport in and how effective the infights are. [5]

UV -respawn is almost exactly the same route, except the cacodemon can be skipped and infighting plays a greater role at the end. [6]

A handy berserk pack makes Tyson easy, the only significant time delay is having to use the pistol on the cacodemon from medium range.