MAP01: Kush Control is the first map of DBP45: Vrack Botanicals. It was designed by Jon Vail (40oz) and uses the MAP02 music from Scythe X by Bloodskull as its music track. 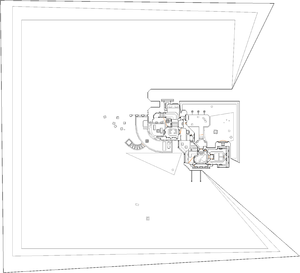 Map of Kush Control
Letters in italics refer to marked spots on the map. Sector, thing, and linedef numbers in boldface are secrets which count toward the end-of-level tally.

From the start, head west down the stairs and grab the shotgun. Once you reach the foot of the stairs, several zombiemen will pop up, though they are easily dispatched via some conveniently placed explosive barrels. Take the stairs to the north to enter the base, which is inhabited by several low-tier enemies. There is a super shotgun in the northeast corner of the room which will spawn in several demons when grabbed. Climb the stairwell on the northwestern end of the room to the second floor and loop clockwise around the upper floor until it dead ends. In this area, there is a chaingun pickup facing east (towards the base's entrance) and a green button facing north. Press the button to lower a wall to the north containing several shotgun guys. Head north up the stairs and press the switch to the east. Head back down the stairs and through the newly opened door to the east but beware the heavy weapon dude that will ambush the player when the door is crossed.

Head south to a room with a view to the starting area that contains several demons and imps. Head clockwise up the stairs in the northwest corner of the room and continue south up the stairs and go through the door to the west into a room containing the red key which is blocked by several bars and guarded by imps and a Hell knight. Take the door to the west into a darkened area and press the button to the north to lower the elevator. Continue west and press the switch to raise the bars blocking the red key, which will also raise a door revealing several zombiemen. After dealing with the zombiemen, ride the elevator back up, grab the red key, and head north through the red door to an outdoor area. Dispatch of the two shotgun guys and continue north towards several crates. After dealing with a teleport ambush, head east and open the southernmost door and press the switch inside. This will open the large door to the north and unleash two heavy weapon dudes. Go through the newly opened door, head south and press the exit switch on the west wall.

* The vertex count without the effect of node building is 2963.