MAP01: La Muerta Island is the first map of Avactor. It was designed by Eradrop and uses the music track "". The par time defined in the DEHACKED lump is 19:00. 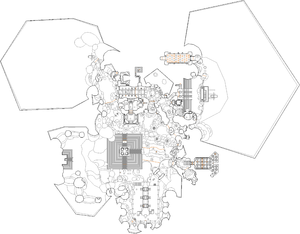 Map of La Muerta Island
Letters in italics refer to marked spots on the map. Sector, thing, and linedef numbers in boldface are secrets which count toward the end-of-level tally.

From the starting ship, fight your way up the stream and past the pyramid to the south stairs. A switch at the southern end of the waterway releases an ambush and opens the bars north of the waterway. Head north through the doorway and into the pillar room. Activate the switch and step on each of the three rising pillars to trigger an ambush. Collecting the blue skull key will cause the pillars to start crushing, which may help dispatch the ambushers, and open the exit.

Use the blue skull key to retract the bars north of the entrance stream and trigger an ambush. Continue through several more ambushes to the hall of pillars. A switch at the western end of the hall lowers the bars blocking progression and a rocket launcher on a pillar. In the berserk room, attempting to climb the stairs triggers an ambush. Pressing switches in the alcoves triggers two more ambushes and restores the stairs. Climb the pyramid for the red skull key and another ambush.

Return to the south side of the pyramid and use the red skull key to raise stairs. Climbing the pyramid will teleport you to the northwest corner of the map. Fight your way downstream to the exit ship. A teleporter in a cave leads back to the hall of pillars.

A lost soul (Thing 1259) in one of the monster caches has no flags set for any of the three difficulty classes, so it does not actually appear in the level. It is at the same spot as a cacodemon on skills 3-5, so probably was intended to appear on skills 1-2.

* The vertex count without the effect of node building is 15777.