MAP01: Levenbrech is the first map of Alien Vendetta: Black Label. It was designed by Brad Spencer and uses the music track "Desecrated Village" by James "Jimmy" Paddock.

The name "Levenbrech" is likely a reference to a fictional military rank in the Dune universe, mentioned in Children of Dune. The word is a combination of Dutch and German and means approximately "life-breaker". 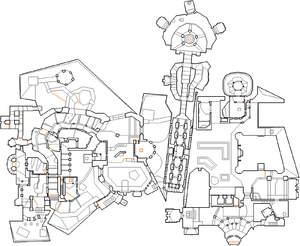 Map of Levenbrech
Letters in italics refer to marked spots on the map. Sector numbers in boldface are secrets which count toward the end-of-level tally.

* The vertex count without the effect of node building is 3637.