MAP01: Loading Bay is the first map of Doom 2 the Way id Did. It was designed by Matt Cibulas (RottKing) in the style of Sandy Petersen. The par time is 30 seconds. 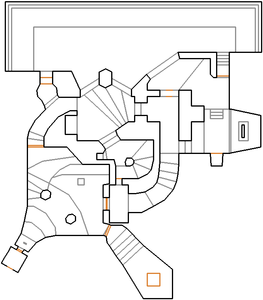 Map of Loading Bay
Letters in italics refer to marked spots on the map. Sector, thing, and linedef numbers in boldface are secrets which count toward the end-of-level tally.

Go forth up the stairs. Turn right and go up the other staircase until you approach a UAC door. Open the door and enter the brick room with two columns. Turn left and open the exit door. Flip the switch to exit the level.

Before going right the second staircase, flip the switch to temporarily lower the lift and enter the next room. Turn right and walk up a staircase. Go forth and take the shotgun. Two platforms on either sides will open, releasing imps and zombiemen. Kill them and do not forget to pick up some stimpacks, various health and armor bonuses.

* The vertex count without the effect of node building is 325.