MAP01: Mezzanine is the first map of Eternally Yours. It was designed by Michael Jan Krizik (valkiriforce) and uses the music track " ". 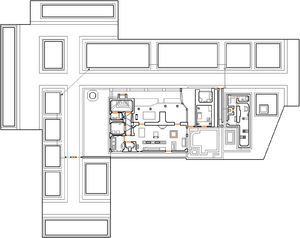 Map of Mezzanine
Letters in italics refer to marked spots on the map. Sector numbers in boldface are secrets which count toward the end-of-level tally.

In singleplayer, three berserk packs are unreachable. The sector they are in has voodoo dolls of the four player starts and is activated upon stepping on the toilet in Secret #1, giving each player the berserk powerup. The maximum number of items possible in singleplayer is 95%.

* The vertex count without the effect of node building is 1475.