MAP01: Mongolesium is the first map of 32in24-5, a deathmatch megawad. It was designed by Shaikoten, detailed by Sarah Mancuso (esselfortium), and uses the music track "Pray!" by Apocalyptica, sequenced to MIDI.

It was the last of eight initial layouts submitted by Shaikoten, who posted the first version of the map in the project thread 34 minutes before the end of the 24-hour period. 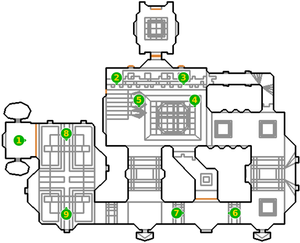 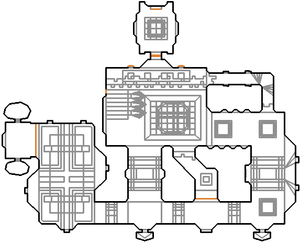 Mongolesium takes place in a small Gothic-themed building, featuring elaborate lighting detail to show off the impact of the new approach to the 32in24 concept. There are two main rooms in the map, and they are connected by multiple hallways. The room to the north is the larger of the two, and a large billboard showing the TITLEPIC of the first 32in24 WAD can be seen on its western wall. Some stairs in this room lead up to a walkway running along the north wall. A rocket launcher is at the top of the stairs, and further along the walkway, players can find a door that leads to the exit room, though it only contains the exit switch itself, with no items to be found inside. A small tunnel to the east of the exit door is lined with individual rockets, and leads to a megaarmor, from which players can jump down into the main hallway that runs around the eastern and southern boundaries of the map.

An alcove runs along the eastern boundary and contains a supply of health and ammo, including two boxes of shells. Around the corner, the hallway continues along the southern boundary of the map. Not far from the south-east corner is a lift on the inside wall, which leads up to a short tunnel back to the north room, and it contains a BFG9000 and a green armor.

Continuing along the southern boundary towards the south-west corner, players will pass a short hallway that allows quicker passage between the south-west and northern rooms. The south-west room itself contains two alcoves each holding a backpack and two stimpacks. In the north-west corner is a lift that players can use to reach the plasma gun.

This level contains nine spawn points. All players get a super shotgun on spawn unless noted otherwise.