MAP01: Mt. Doom is the first map of The Enigma Episode. It was designed by Jim Flynn and uses the music track " ". 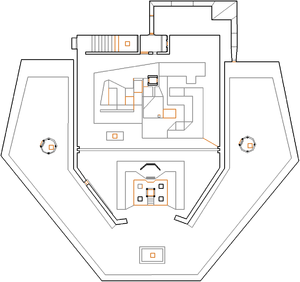 Map of Mt. Doom
Letters in italics refer to marked spots on the map. Sector, thing, and linedef numbers in boldface are secrets which count toward the end-of-level tally.

You start this episode in a small room with three demons and a shotgun. Pick up the gun and clear the area. When you exit, go left and continue until you find the entrance to the concrete structure. You will see a super shotgun which you can pick up by doing a long jump. Now, press the red switch and to the west a high platform will drop down, get on it. As you go up, there will be a soulsphere and next to it is a platform. Go up again. In front of you will be some thin steps which you can use to climb up to the end of the tower. Once you climb up, the rest of the map opens up and an army of enemies will attack you, so it is recommended that you pick up the invulnerability.

Go south and then turn north as you enter the new area, you will see a red brick structure. Activate the switch next to it to go up the stairs, and enter. When you go up, do not stop. What looks like a flat wall in front of you is actually a set of very thin stairs, which will lead you to the blue key.

Once you have it, simply go to the north end of the map and you will see the blue doors. Inside is the exit.

* The vertex count without the effect of node building is 481.