MAP01: Mt. Lazarev is the first map of Plutonia 1024: The Plutinya Experiment. It was designed by Ilya Lazarev (joe-ilya) and uses the music track "Waiting for Romero to Play", created by Robert Prince for Doom II. The par time defined in MAPINFO is 30 seconds. 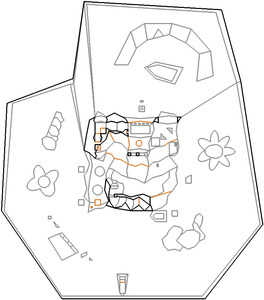 Map of Mt. Lazarev
Letters in italics refer to marked spots on the map. Sector, thing, and linedef numbers in boldface are secrets which count toward the end-of-level tally.

Turn left as the level starts and follow the grass path to a shotgun guarded by a chaingunner, then head up the brown steps on your left and push past a chaingunner and one or more shotgun guys to find a berserk pack in a small lava pool. Take this item then go back outside to find that an arch-vile has teleported in; after killing it, drop to the ground floor and head through a section of the north wall that has lowered to reveal a plasma gun. Kill one or two mancubi that appear in front of you then turn left to see a tunnel with a revenant (on Hurt Me Plenty (HMP) skill level) and a demon (on Ultra-Violence (UV) and Nightmare (NM)). After killing them, enter the tunnel with caution as another revenant is waiting around the next corner, along with an arch-vile that is confined to a wooden platform.

At the end of the tunnel is a skull switch, but do not press it immediately as a Hell knight (and spectre on UV and NM) will be revealed behind you and will block your escape route. Press the switch then go back to where you found the plasma gun, where the west wall has opened to reveal a cacodemon. Head past it to reach a blood pool, kill one or two revenants and a knight who are waiting outside then step across the flesh platforms to reach a teleporter that will send you to the east side of the map. Kill a knight waiting on the ledge above then head up two sets of wooden steps to reach a platform with the yellow skull key - approach it with caution as a mancubus and one or more chaingunners will appear when you reach the top ledge. With the yellow key, go back to where you found the plasma gun and press the button on the west wall to open the bars - kill or dodge an arch-vile (and chaingunner on HMP or higher) that teleports in, then step through the bars to finish the map.