MAP01: Nazi Combat Base is the first map of The Twilight Zone. It was designed by Paul Corfiatis and uses the music track "Deep into the Code," originally composed by Robert Prince for Doom. The par time defined in MAPINFO is 2:05. 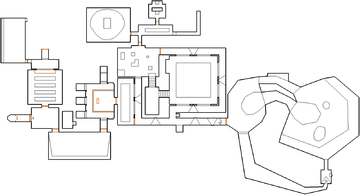 Map of Nazi Combat Base
Letters in italics refer to marked spots on the map. Sector numbers in boldface are secrets which count toward the end-of-level tally.

From the start, go up the northern staircase into the crate room. Open the wooden skull door and enter a room which contains shotgun guys on a table. On the northern end of the table is a miscoloured wall, open it to gain access to the red key.

Once you have the red key, head through the red key door and follow the corridor around the courtyard east, south and west then south. Head east past a cage into the hellish area. At the southern end of the hellish area is a wide door but it is locked. So head eastwards along the northern corridor into another large hellish room with a few barons of Hell and cacodemons. You will find the blue key at the southern end of the room inside a cage and a switch with blue skull markers. Press the switch to open the door in the first hell room, then proceed through a hot area to get the blue key.

Exit the hellish area and head straight ahead west. Open a door and then go through the blue key door and when you get the chaingun, the walls open up revealing a fully lit area with enemies and Wolfenstein doors. When you go into the fully lit area, the Wolfenstein doors open revealing Nazis, and two mancubi. On the northern end is the yellow key but is inaccessible. Go through the southern door, proceed through a small courtyard and then enter a grey room with Nazis and the yellow key door on the western end and a normal door on the northern end. Head north through the cinema and open a door on the western side to another courtyard, head north and shoot the switch, then head back and another hidden door at the northern end of the cinema has opened. Press it and go back and get the yellow key. The exit is located behind the yellow key door.