MAP01: Old Dog... New Tricks is the first map of The UnMaking. It was designed by scwiba. 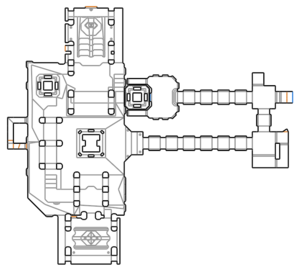 Map of Old Dog... New Tricks
Letters in italics refer to marked spots on the map. Sector, thing, and linedef numbers in boldface are secrets which count toward the end-of-level tally.

An unmarked secret exit is located in the tunnels behind the large door. Destroy all 22 explosive barrels in the map to permanently open this door. Two barrels can only be destroyed after accessing secret areas.

* The vertex count without the effect of node building is 1281.