MAP01: Outpost is the first level of Memento Mori II. It was designed by Denis Möller and uses the music track "Avalanche" by Mark Klem. It contains a separate area for multiplayer competition.

Operation Memento Mori 2. This is your first mission out of 30. Reports say that there are possibly 2 more sectors to get through, but we don't have any detailed info on this.
Your mission now is pretty easy; get into sector 1 and save the area. Report any contact you get, find out what happened out there. A picture taken by our last drone doesn't show any activity, this might have changed since the picture was taken 3 days ago. 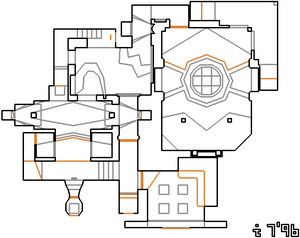 Take care of the former humans in front of you. Approach the red key door (A), and walls will open to the northeast to reveal imps and a red skull key (B). Enter the red key door, dispose of the chaingunners (two on Ultra-Violence or above, one on Hurt Me Plenty, none on Hey, Not Too Rough or lower,) and take down the imps and former humans in the next room (C). Climb up the stairs and the gate will open; flip the switch to open the way to the yellow skull key (D). Take care of the opposition before grabbing the skull key, which will release demons into the room. Head to the yellow skull key door (E), open it, head up to the walkway (F), and open the exit door (G). Kill the former human (a sergeant on Hurt Me Plenty or lower, a chaingunner on Ultra-Violence or higher) and flip the switch to end the level.

There are two hidden imps in the red skull key area who will throw fireballs at you through walls. They must also be killed to obtain 100% Kills.

After the yellow key door, there is a room to the east (H) that contains health bonus and armor bonuses, a clip, some shells, and a few enemies you can kill for their ammunition. Entering this room will also cause the aforementioned hidden imps, if they are still alive, to teleport into the first room. 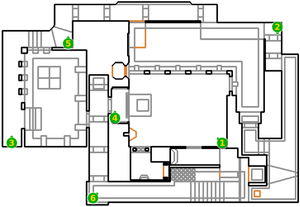