Paradox is a map that is part of the Master Levels for Doom II. It was designed by Tom Mustaine, and is contained in the file PARADOX.WAD. In PlayStation Final Doom port it is the tenth level and uses the music track "Breath Of Corruption". 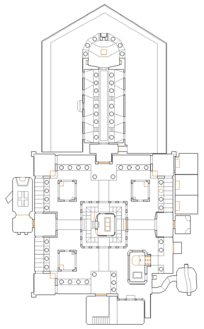 Map of Paradox
Letters in italics refer to marked spots on the map. Sector numbers in boldface are secrets which count toward the end-of-level tally.

The yellow key is located in the northernmost part of the map. To get there use the eastern staircase near the beginning of the level (A). Proceed until you reach the balcony with several metallic columns. Open the door. Go past the long hall with columns to the end (B). In the room (C) grab the yellow key.

Open the yellow key door in the western side of courtyard where you have began this level. Once you enter and try to approach the other end of the room the door containing the baron of Hell will open. Flip the switch that is accompanied by two blue torches. Flipping the switch lowers the bar that blocks way to the room with three teleporters in castle-like building in center of the courtyard. Leave the room you are in and go inside that building. Then walk the staircases and enter that room with a plasma gun and the teleporters. You don't need to enter the middle one as it leads to the room containing no key but a berserk pack. Enter any of two teleporters except of the middle one. When you enter you will be in a tower with a corresponding key and a trap with teleporting monsters.

Making way to the exit[edit]

The exit is located near the beginning of the level - in the eastern part of the map. Find the place with three columns. Open the bars that block entrance of the south-eastern tower then use lift leading inside. Now jump over to the alcove containing exit switch.

One rocket launcher and some ammo are placed into a room with a deathmatch start thing which is inaccessible during normal gameplay. These items are not flagged as multiplayer-only, so they always appear.

One deathmatch start (Thing 195) is not flagged to appear on skill Hurt me plenty and below, but because of special handling in the engine, it functions normally on all skill levels.

* The vertex count without the effect of node building is 1559.