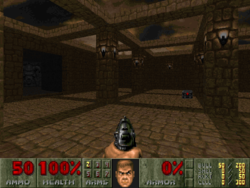 MAP01: Pink Horde is the first level of The Abyss. It was designed by Miklos de Rijk (H2SO4). The level in single player is designed around the berserk powerup. While playable alone, the level is largely centered around "melee" deathmatch.

"Don't try getting the weapons; you're not supposed to get them anyway."
― ABYSS.TXT [source] 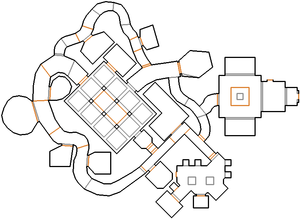 Map of Pink Horde
Letters in italics refer to marked spots on the map. Sector numbers in boldface are secrets which count toward the end-of-level tally.

The main goal is to use the berserk pack to punch the demons that appear upon sight and through trap doors that open throughout the tunnels. Lost souls and imps also make an appearance. In the exit room, a cacodemon "boss" guards the exit switch. It may be best to avoid it, as it can bite you.

The museum, located at the southern-most part of the map, contains an array of weapons that appear as if they cannot be picked up. The text file reads: "Don't try getting the weapons: you're not supposed to get them anyway."

The museum room has two secrets:

The start room has one unofficial secret:

For speedrunning, the exit room is within reach mere moments after entering the level by taking the left door in the start room, taking the first right, then the next left.

Pink Horde is primarily a deathmatch arena, complete with trap doors for ambushes, although it may be too large for duels. Players must rely on berserk packs and chainsaws, resulting in frantic hallway chases. Four players is the sweet spot, allowing for several territorial areas in which players can fight for control. While there are no obvious choke-points other than the center room (the berserk packs reside there), the west-most side can be rife for "mini-duel" skirmishes over the megasphere, as well as the southern-most "museum" room, which also contains a megasphere.

The best strategy for an inexperienced player is to use one of the many ambush doors and wait for the door to open. Listen for the direction of the other trap doors opening and plan accordingly when your room door opens. If the inexperienced player has a berserk pack, it is possible to frag a player before he manages to grab the megasphere.

Unless players are competing in a source port that allows powerups to respawn, the level may grow stale for some as the players must resort to chainsaws for the rest of the session.