MAP01: Python is the first map of Sunder. It was designed by Insane_Gazebo and uses the music track "Lunar Military Base" from Descent. 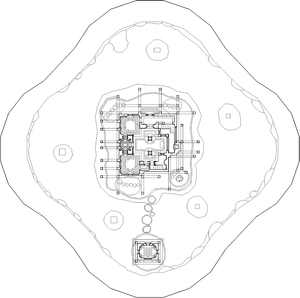 Map of Python
Letters in italics refer to marked spots on the map. Sector, thing, and linedef numbers in boldface are secrets which count toward the end-of-level tally.

Grab the shotgun and green armor at the start along with the backpack. Opening the door reveals the main room, with revenants and an arch-vile in the middle and two columns with Hell knights behind them. Your first goal is to reach the switch at the southeast end, where you will find some boxes of shotgun shells and medikits. It is highly recommended to simply run for the switch without firing. Once the switch has been flipped, the northern door will be open, and a horde of imps will come in. Also, the columns will open, revealing chaingunners. You need to get past the horde of imps and head right, which can be tough, but utilizing monster infighting will help. A chaingun is at the end of the floor at the northeast end along with some steps leading up. The next switch is behind the super shotgun.

Flipping that switch opens up the southwest part of the main room containing cacodemons, mancubi, and a baron of Hell. It also teleports more chaingunners to the two columns. Go to where the megaarmor is, this will cause the wall in front to lower, returning back to the main room. The northwest portion will be open with Hell knights, mancubi, revenants, and an arch-vile coming out from there. Take note that northwestern portion of the main room can be accessed through new walls that opened in the starting room, and a cyberdemon will have teleported into the main room as well. The switch at the northwest portion reveals another switch back where the megaarmor was. This switch opens the door leading outside the building.

There are no monsters outside the building yet, so make your way to the south side and hop the rocks going south. The rocket launcher is inside this building along with another switch. This switch causes cacodemons and arachnotrons to teleport to the distant rocks on the outside, as well as three arch-viles who spawn back inside the building, likely resurrecting most of the dead monsters inside. If you go back inside, you will notice the way back to the second switch (where the super shotgun was) is now blocked off. The final switch you need to flip is near where the first switch was pressed, back at the southeast portion of the main room and in the southeasternmost corner. This switch will remove the bars east of the main room, and from there you can finally exit the map.

* The vertex count without the effect of node building is 3031.