MAP01: RAMP Central is the hub map of Rabbit's All-comers Mapping Project. It was designed by David Newton (DavidN) and uses the music track "The Stage of History" from Soulcalibur. It features transporters to every level as well as a garden area that will be decorated with rewards granted by completing maps. 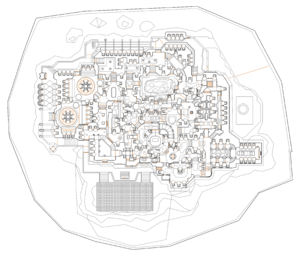 Map of the RAMP Central

The map is sectioned into 16 named areas for navigation. Supplied around the hub there are many 'RAMPO' terminals, one of which is in front of the starting location signaling you. Using this terminal will list maps alphabetically that you use to locate on your automap. In addition to RAMPO there are other wall terminals from which you can adjust the difficulty in-game.

Points are gained by completing levels, equal to the difficulty and length ratings of each map added together. In addition to points you may gain medals for finishing maps and killing all monsters inside them. Note that several maps are very difficult or impossible to get 100% kills in, in which case you are awarded the monster star automatically. Gaining points or completing other challenges awards trophies and other decorations for the garden.

In the northeast section of the map, "The North Balcony", there is a misaligned texture on the wall. Lower this to find your way to "The Secret Place" which thanks and labels all RAMP contributors.