MAP01: Renewed Faith is the first map of Community Chest 4. It was designed by William Huber and uses a MIDI of the Final Boss theme from The Ninja Warriors sequenced by Robert Hansson. 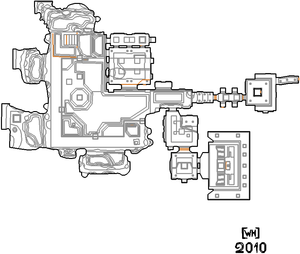 Map of Renewed Faith
Letters in italics refer to marked spots on the map. Sector, thing, and linedef numbers in boldface are secrets which count toward the end-of-level tally.

Go through the door in front of you. Head outside through the next doorway, go west and look north till you find a switch. Throw it and go through the doorway that has opened in the southern end of the building nearby. Press the button in the southeast corner and take the lift in the north. Climb the stairs to the west, and go south and east around the walkway until you reach the button at the end. Push it to lower the blue pedestal in the west, and go there to pick up the blue key. Jump down from there, go east to the blue-bordered door and open it with the blue key. Attempt to open the exit door and closets containing monsters will open in the hallway. Press the button in the southwestern closet to open the exit door, and circle around the pillar in the next room till you find another button on its eastern side. Press it to open the wall around you, go into the passage in the northeast and throw the switch at the end.

* The vertex count without the effect of node building is 3073.