MAP01: Sanctuary is an area in Strife accessible from the town. It uses the music track "Action".

In the town, Rowan tells you that you must kill Beldin who is about to reveal the location of the Front. As soon as you enter the Sanctuary, alarms go off and acolytes begin to attack. Using the crossbow that Rowan gave you, you must defeat the acolytes and get to Beldin. You can get some health and ammunition in the Sanctuary. When you get to Beldin, he refuses to talk to you and you must kill him. Once he is dead, he will drop his ring, and you need to take it back to Rowan. Rowan will reward you and give you the com link. It allows you to hear BlackBird for the first time. She leads you to the secret underground base where the Front is located. 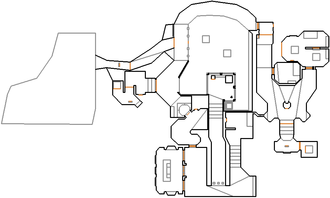 Map of Sanctuary
Letters in italics refer to marked spots on the map. Sector, thing, and linedef numbers in boldface are secrets.

Turn right and press the button on the south wall to open the door, then step through the green doorway which will set off the alarm. Turn right and take the medical kit and electric bolts here, then press the button to ride the lift upwards. Kill the acolyte (or two on Elite or Bloodbath skill levels) and head south through the door. Keep following the passage past a forcefield (the offering chalice that Harris wants is behind it) and then a set of bars, taking the crossbow and other supplies before climbing a staircase. Kill another acolyte here, take the items and press the button to lower the bars you passed earlier.

Go back down the stairs and head north through the now-open doorway. Go down the steps here and press the button ahead, which will raise a bridge over the water ahead of you. Retrace your steps to the door near the start of the level and cross the bridge you raised. Follow the path to a wooden door and go through it, then press the button to lower the lift on your right. Ride this lift up and go through the door on your left to find Beldin in a cell; kill him and pick up the ring he drops. Leave the cell and turn left to see a gray pillar with a light; press the button on the south side of the pillar to lower a set of steps behind you. Go up these steps to return to the town; the door in front of you provides a quicker way to get back to Rowan.

If you want to lower the forcefield hiding the offering chalice, after killing Beldin leave his cell and follow the passage east to a door. Go through it, kill the acolyte on guard here, take the supplies and throw the switch on the south wall. Backtrack to the offering chalice room where you will find the forcefield has lowered. DO NOT touch the chalice; doing so will make the game unwinnable even if you drop the chalice, as when you speak to Governor Mourel he will know you have taken it and summon a horde of acolytes to kill you. (The Veteran Edition changes this sequence so that after speaking to Mourel, you are knocked out instead and returned to the waste disposal area. Returning to Mourel will cause him to forget about the chalice and allow you to continue.)

If you talk to Beldin before killing him, he will complain about being set up by "that bastard Harris". This is a clue that Harris cannot be trusted.

Three silver fluorescent lights (things 49, 50 and 58) have no flags set for any of the three difficulty classes, so they do not actually appear in the level.

This level contains a, presumably accidental, voodoo doll as there are two player 2 start things in the starting room, one at the same position as the teleport landing. On the other hand, a player 4 start thing is missing, so cooperative play is only possible with up to three players.