MAP01: Secret Operation 1 is one of the two top-secret bonus levels of Memento Mori II. It was designed by Steve Towle and uses the music track "Avalanche" by Mark Klem. It contains a separate area for multiplayer competition.

This map and MAP02: Secret Operation 2 are not included in the regular PWAD. To play them, you must download the Memento Mori II infopack, rename the file MM2INFO.DAT to MM2INFO.WAD, and load it alongside MM2.WAD (and, optionally, MM2MUS.WAD). Some modern source ports can load the .DAT as a .WAD without any renaming needed. This map replaces MAP01: Outpost. 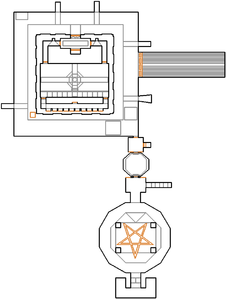 Map of Secret Operation 1
Letters in italics refer to marked spots on the map. Sector, thing, and linedef numbers in boldface are secrets which count toward the end-of-level tally.

Upon starting the level, kill or evade the enemy standing in front of you (a trooper on Hurt Me Plenty or lower, an imp on Ultra-Violence or higher). You can evade or kill the sergeants and grab the shotgun under the hanging corpse. Head up to the switches; the western switch activates the elevator while the eastern switch opens the door. Activate them both, and circumvent or dispose of the demon (Hey, Not Too Rough or lower) or spectre (Hurt Me Plenty or higher) in your way. When the elevator has raised, open the door and rush out, or kill the spectre (Ultra-Violence or higher) in the next room. Enter the house at the north of the map, and head through either door into the central room; dispose of the enemies there. Head up either staircase and enter the hallway, lined with health bonuses. Grab the red skull key (Hey, Not Too Rough or lower), or activate the center switch to lower a pillar in the central room holding a red keycard (Hurt Me Plenty or higher). Leave the house, open the red key-locked bars on the east, and rush through the opening to finish the level.

It is impossible to obtain 100% Kills on this level due to non-functioning monster teleporters that leave several enemies outside of the valid playing space:

On multiplayer-only some monsters cannot be killed:

Some weapons and ammo are located in the deathmatch arena, thus unreachable in single-player mode, but are not flagged as multiplayer-only. See the table below. 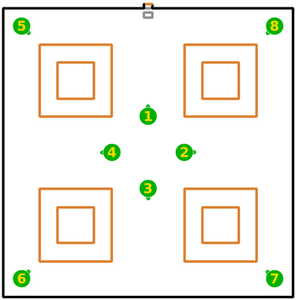 This level was the first submission for MAP01 of Memento Mori II. However, it was rejected by Denis and Thomas Möller for quality reasons.[1]