MAP01: Shuttlecraft is the first level of Icarus: Alien Vanguard, set at the Earth-based depot mentioned in the story. The goal is to break into the depot's hyper-shuttle, reclaim it, and fly it to the Icarus. It was designed by Christopher Buteau and uses the music track "Recapture" by David Shaw (Tolwyn). 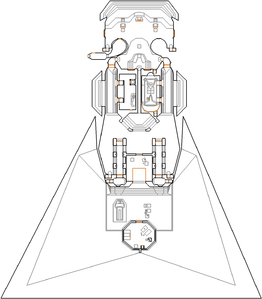 Map of Shuttlecraft
Letters in italics refer to marked spots on the map. Sector, thing, and linedef numbers in boldface are secrets which count toward the end-of-level tally.

Press the switch at the beginning to appear in a room with crates. Open the door and you will be outside with a lot of zombies. Head for the northern lift and press either switch to lower it. Ride the lift up to another room with crates and open the door north. Inside of the shuttlecraft, make note of the two side pumping areas with lava in them, then make your way to the bridge of the shuttle which is to the north. At the top of the bridge you can grab a chaingun, then go towards the three terminals at the front of the shuttlecraft. Enter the central one and grab the box of shells. Doing so turns off the lights in the bridge area and imps will teleport into the bridge. Turn around when you pick up the box of shells and you will see the blue keycard to the left. Get the keycard before it closes, then leave the bridge area. Go towards the right wing of the shuttlecraft, and open the walls with blue bars on them. You will find a chapel-like area. Go towards the chair with shotgun shells on it, and the area opens up surrounding you with imps. Leave this area and head southward towards the lava pump. There will now be a switch next to it, which deactivates a forcefield so you can enter the pump. Cross over to the other side, and the lava will empty out while a wall lowers revealing a small room. Flip the switch inside and take the lift up to obtain the yellow keycard, then go back and then to the left wing of the shuttlecraft. Open the wall with yellow bars around it and use the lift to go downward. In this laboratory-like area, shoot the cage with the imp inside it. Kill the imps that spawn in there and make sure to grab the health bonus, then leave the area. Head south to the other lava pump which opens after collecting the health bonus before, and repeat the same procedure as you did with the previous pump to obtain the red keycard. After you get it, head back to the bridge and open the red door which is due southwest of the leftmost terminal and says "Ship Exit". Open the next door and press on the red wall furthest to the right to leave the level.

In the beginning room, look towards the gray crates to the left. Open the middle one to get some stimpacks. (Note: if you are playing a cooperative multiplayer game, the other players will start in here.

* The vertex count without the effect of node building is 1715.