MAP01: Sintlabs is the first map of Whispers of Satan. It was designed by Paul Corfiatis, who also wrote the music track for this level, "New Horizon". 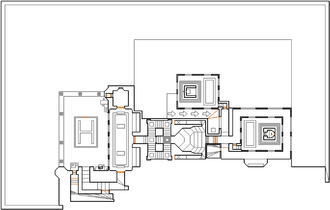 Map of Sintlabs
Letters in italics refer to marked spots on the map. Sector, thing, and linedef numbers in boldface are secrets which count toward the end-of-level tally.

Open the door at the beginning and kill the zombiemen in the computer room. Head straight across to the next door and follow the path to the helipad outside. Flip the switch at the helipad here, and then return to the computer room to find the door to the right is open. Go down either staircase to reach the water. The door up ahead has two sets of bars blocking it. To remove them, you need to head through both side paths in the water to two switches, which will lower the two sets of bars. Now open the door and you will see the exit door through the window, and a door leading to the room it is in. Ignore this door and head all the way down the hallway until you find a switch. Press it to lower two walls in front of you revealing shotgun guys in the next hallway. Open the door behind them to find a room similar to the exit room with imps and a switch. Press this switch and then return to the door you ignored before to reach the exit room. The exit door is now open.

Secret exit (ZDoom ports only): Enter the exit room, then run all the way back to the starting point to find an alcove with a secret exit switch. This will take you to a hidden warp zone, in which you can enter MAP10 or MAP27.

* The vertex count without the effect of node building is 1079.