MAP01: Staging Area is the first map of Doom 64. It was designed by Randy Estrella. It uses the music track "The Madness". 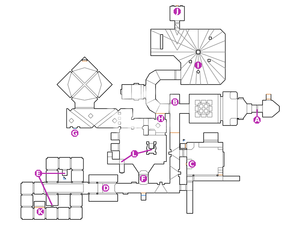 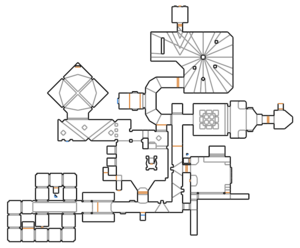 Map of Staging Area
Letters in italics refer to marked spots on the map. Sector and Thing numbers in boldface are secrets which count toward the end-of-level tally.

When you begin the level, you may have to deal with troopers in the cages to the left and right if you're playing on I own Doom! or Watch me die!. Afterwards, you can turn around and pick open the door (A) to open a smaller room area with a berserk. You may want to save this for later. Drop down and grab the shotgun. In the hallway, you'll encounter sergeants. Head down the hallway killing them, but be wary as you reach the halfway point. The wall at (B) will open, revealing two medikits and a demon on higher skill levels. Enter the door on the left side of the hallway after. Kill the troopers in here. Head up the steps to the conveyor belt (watch out for the panel in the opposite wall; it opens revealing more troopers). Hit the switch at (C) and run back across to the newly opened door, where you can pick up a chainsaw. As you head up to the conveyor belt via the stairs, a panel will open on the other side of the room with one or two troopers behind it.

Take the elevator at (D) to reach a maze of sorts. As the elevator heads up, prepare to be attacked from all sides from troopers and a demon if you're playing on higher difficulty levels. Switch (E) opens the door to room (E), though it's timed and you'll have to be quick. Inside is a blue key. On lower difficulty levels, the key is sitting out in the open, right next to the switch while a berserk pack will occupy room (E) instead.

Head back down and open the blue door at (F). Kill the troopers in this room, and head up the stairs, killing more sergeants. Switch (G) at the end of the hall opens the room behind you, and demons pour out. Kill them (chainsaw works well here) and hit the switch in the back of this room to open up the wall at (H). Head from here into room (I), kill the demons and make sure to check behind the wall on the west side of the room on higher difficulty levels, since there are sergeants that hide behind it.

Open the door to the exit room (J), kill the imp, and hit the switch to exit the level.

Across from the blue door (F) is a small blood spot on the wall. Open the wall here and jump in the teleporter to end up back on the starting platform. Moments later, one or two sergeants will spawn in the area below. — This teleporter closes after using – at least in Doom 64 EX, but not in Doom 64 TC: Absolution.

There are ten explosive barrels scattered around the map, and blowing up all ten causes a teleporter to open for a brief period of time, leading to a secret level. The teleporter in question is through door (A), in the room with the berserk pack. Therefore, you need to save the very first barrel for last. Here is a list of all the map's barrels:

Once you've destroyed the last barrel, quickly open the wall at (A) and run to the left to enter the teleporter. This is the entrance to MAP32: Hectic.

Note: Due to the fact that you get a small bit of storyline instead of the completion screen, there's a mistaken belief that the exit to Hectic is the fourth and final secret.

The indent with a switch in secret #3 is also tagged as a secret (sector 157), but is much too small to register. Because of this, it is impossible to obtain 100% secrets on this map.