Subterra is a map that is part of the Master Levels for Doom II. It was designed by Christen Klie, and is contained in the file SUBTERRA.WAD. In the Playstation Doom port it occupies the twelfth slot and uses the music track "The Broken Ones". 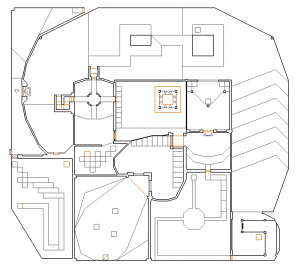 Map of Subterra
Letters in italics refer to marked spots on the map. Sector numbers in boldface are secrets which count toward the end-of-level tally.

Enter the southern room and move on the skull blocks until you enter a teleporter. At the intersection, enter either the western or the northern door. The latter route is faster. On the grounds, go to the south-west of this area. Press the switch that lowers the wooden bar with the yellow key. Get to the top either by lowering the wooden lifts near the yellow key door (a much faster way) or by using the teleporter at the south-east. Once on the top, you will see two cages with monsters. Go to the eastern end, walk around the second cage (or run over a gap) and grab the yellow key.

Drop down to the grounds and enter the western door indicated by yellow rock in both the floor and the ceiling. Open the blue door at the south. An alcove to your right will open along the blue door. It contains a button to turn on the lights in the southern room. Enter the place. Carefully walk on the steps until you reach the button at the end. Press it and get back to the room where the yellow key door is. Now you can enter the nukage in the north without getting trapped. Flip the switch at the end of the nukage pool.