MAP01: Sunset is the first map of Alien Vendetta. It was designed by Martin Aalen Hunsager in 1997, was the author's first map, and was constructed in DETH. In the first release of the megawad, it uses a MIDI rendition by Christer Holm of the Level 1 theme from the Commodore 64 game, The Last Ninja 2. In the second release, it features an unused MIDI track composed for Carmageddon, which can be found as CARMID03.MID on the game CD. The par time defined in the executable is 1:10. 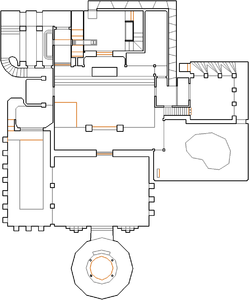 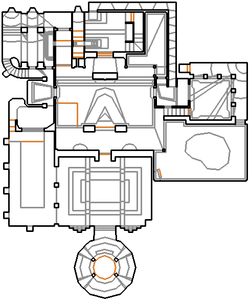 Map of Sunset (second release)
Letters in italics refer to marked spots on the map. Sector, thing, and linedef numbers in boldface are secrets which count toward the end-of-level tally.

When you go up the eastern staircase, look to the northwest to find a wall with more visible gaps between bricks than the others. Press on it to reveal a teleporter leading to a berserk pack. In the first release of the megawad, this counted as a secret. (sector 70)

Secret #1 having four sectors set to secret is an error. It was introduced when Kim Malde added more complex lighting sectors in the updated version of the map. Martin considers this an error in the map as it was not intended to be like this by him or Kim.

The level graphics for the map has an alignment error.