MAP01: System Control is the first map of TNT: Evilution. It was designed by Tom Mustaine, and uses a music track shared with MAP09: Stronghold. It is set inside of a very small techbase, and, as the first level, is simple to complete.

A modified version of this level was included in PlayStation Final Doom as MAP14: System Control. 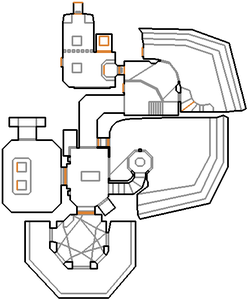 Map of System Control
Letters in italics refer to marked spots on the map. Sector, thing, and linedef numbers in boldface are secrets which count toward the end-of-level tally.

Enter the door. Cross the hallway until you arrive at a dead-end with a raised platform. Hit the switch and climb the new stairs towards the walkway. Go to the blue door, which will open another door in the south-east, and head through the newly-opened doorway. Eliminate the imps in front of the switch and flip it. Go back inside, down the stairs towards the entrance room, and grab the blue keycard. Retrace your steps to the blue door, dispatch the imp inside, and flip the switch. You will slowly descend into another room. Flip the western switch to remove the barrier, and hit the northern switch to exit the level.

Immediately after the first room, you may climb up the eastern stairs to find armor, as well as an imp.

Also after the first room, you can enter the western door, which leads to another room with a trio of zombiemen, and (on Hurt Me Plenty (HMP) or higher) a pair of imps. You will also find a set of computer pillars with a switch on each one. The switch on the northern pillar opens an alcove containing two imps, a pair of stimpacks, a box of shotgun shells, and (on HMP or higher) a megaarmor. The switch on the southern pillar opens the way to the secret below.

Enabling access to the blue key will also free a chaingunner, or two if you are playing on HMP or higher. In the alcove they come from, you can grab two medikits.

System Control was one of the maps Tom Mustaine submitted for inclusion in the Master Levels. While it got rejected by Shawn Green for being "too small", another one of Mustaine's maps got included; Paradox.